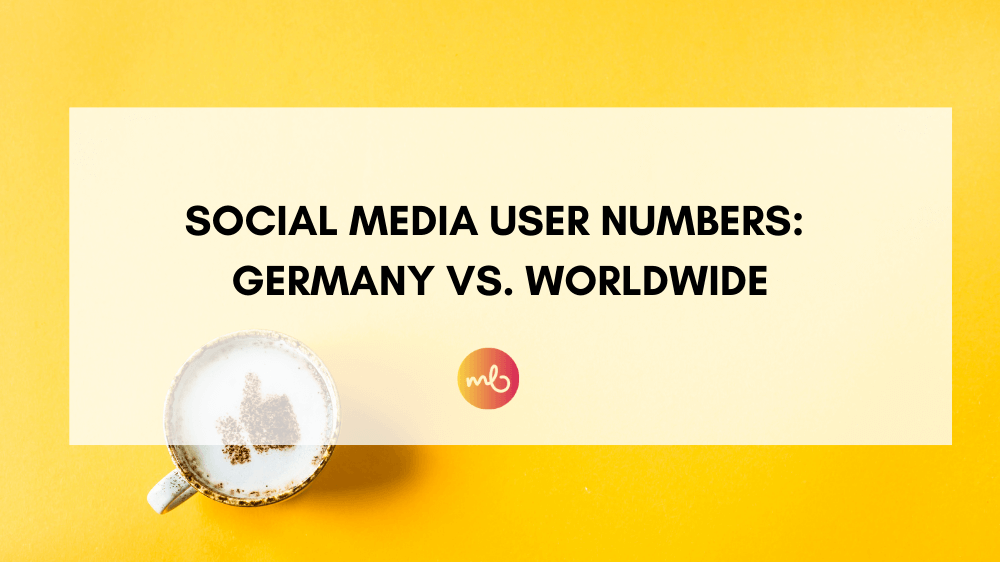 When you’re running your own business, social media is one of the most common ways to market your products online.

Now, if you’ve been promoting and selling your products exclusively in your domestic market, but are thinking about expanding into Germany, you might be wondering whether this will change your social media strategy.

Can you reach your German viewers via the same channels? Will German customers be receptive to your new YouTube or Instagram channel? Or should you consider using different platforms to speak to your domestic and German fans?

So you can make an informed decision about your international social media strategy, I’ve put together some recent figures and stats about the worldwide and German social media landscape – and I hope you find them useful.

These are the social media platforms we’ll look at:

To put the following information a bit more into context, let’s take a brief look at populations first: we currently have a world population of 7.7 billion. There are 83 million people living in Germany (2019).

With this in mind, it’ll be easier for you to draw conclusions from all the following statistics.

In 2020, over one billion people worldwide used Instagram, quite an impressive increase from 500 million in 2016.

In Germany there are 21 million users, which is also a huge increase, compared to nine million users in 2016.

So, user numbers worldwide and in Germany basically doubled over the same time frame.

In Germany, a recent study (2020) conducted by ARD and ZDF (major broadcasters comparable to the BBC) showed: The majority of German users aged 14 – 29 use Instagram on a weekly basis. And only 21% of users aged 30+ use it with the same frequency.

Brands with most interaction in Germany are in the following industries (Hubspot):

Random fact: Soccer player Toni Kroos is the German with most Instagram followers (27 million as of April 2021).

The most recent estimation by Statista regarding Facebook users worldwide is of 2.8 billion active users at the end of 2020. And, despite bad publicity due to data protection issues and voices saying Facebook is dead, the platform continues to grow.

However, if we look at that same statistic more closely, we can also see that this growth is due to increasing user numbers in Asia Pacific and other regions of the world.

65% of global Facebook users are younger than 35 (Statista, 2019), meaning they fall under millennials and Gen Z.

In 2019, 63% of German adults used Facebook. People aged between 25 and 34 are most strongly represented in Germany.

What’s also interesting is the use of mobile devices for Facebook: 87% of Germans use their smartphone when scrolling through their Facebook feed.

LinkedIn has turned into the place to be in the B2B world. And it’s become a serious player in the worldwide social media landscape.

88% of LinkedIn users worldwide are aged 25-54, a period during which job and career goals play an important part in our lives.

As for the German-speaking world, statistics often apply to the DACH region, which is Germany, Austria, and Switzerland. Currently, there are 16 million active users from those countries, which also represents an increase of three million compared to the last quarter.

In the 14-29 age group, 6% use the business platform daily in Germany.

The most common industries on LinkedIn are:

Two billion users worldwide use YouTube. That’s one third of the internet. This is quite impressive growth if we look at its user numbers from 2017 of 1.47 billion.

Regarding age, at least 90% of US internet users between 18 and 44 years have used YouTube at some point. For millennials in the US and the UK, YouTube is the most used social network. And even more surprisingly: 51% of internet users aged 75+ watch YouTube videos.

Another interesting fact: Year on year, searches with the search phrase “How to” increase by 70%. That means that users who want to learn or acquire a new skill prefer to use video.

As for Germany, 40% of the population use YouTube at least once a week. Amongst teenagers and young adults (14 – 29 years), this number increases to 82%. Most users watch video content on their smartphones (54%).

TikTok has 689 million monthly active users worldwide. According to Oberlo “this makes TikTok the seventh-largest platform in terms of users, ahead of others that have been around much longer such as Snapchat, Pinterest, and Twitter”.

The top three German influencers on TikTok are:

On a global scale, Twitter is a very meaningful social network. It has 192 million active daily users (2020) and was able to increase user numbers by 27% compared to the previous year.

Every day, 500 million tweets get posted on the platform. That‘s 6000 tweets per minute. Also, the audience is rather interesting: 24.6% of verified accounts are journalists, which is no surprise given the fact that nowhere else on social media does news get shared as fast as it does on Twitter.

5.2 million German users can be reached via Twitter, with a clear preference from male users: 73% of males and just 27% of females use the platform. When we look at daily use, this number decreases, with just 1.4 million people claiming they browse the site on a daily basis.

Though not a social media channel, but a visual search engine, Pinterest should still be included here, because it’s a major global player in the online marketing world.

2020 was an especially successful year for the platform, and this seems to be continuing in 2021: Pinterest gained a further 19 million users during the last three months, and 111 million users over the last 12 months. That means that Pinterest grew its audience by 30% in just one year!

The app is also loved by Germans: According to the Ad Manager of Pinterest, over 15 million Germans use the platform and save four million pieces of content per month.

In the last quarter, Pinterest in Germany was able to grow its audience by 1.6 million, and by 9.6 million over the past 12 months.

After the official launch of Pinterest ads in Germany, the platform offers brands and entrepreneurs a number of new possibilities to market their products, for example via shoppable pins or Pinterest story pins.

Younger generations especially love to use social media. They’re the group that’s most represented across all platforms, worldwide as well as in Germany. So, if your target group is millennials or Gen Z, then using social media for your online marketing in Germany is the way to go.

Observing user numbers for your specific target market helps you get a feeling for your new audience, even though you don’t speak their language or have any experience with them yet.

And it reassures you that you’re on track with your social media strategy or, alternatively, opens your eyes towards new options to consider.

Keep in mind that user numbers in the online marketing world change constantly, so it’s advisable to keep an eye on them and see if you can tweak your social media strategy further.

By the way: If you’re an English-native solopreneur and need a helping hand with your marketing strategy for the German market and are, then sign up to my 1:1 Marketing Mentoring.

During this six-week programme, we’ll find out what will work best for you and your German customers, so you can easily and confidently grow your business across the borders of your own country.

How to create your global marketing plan 2022 as a solopreneur 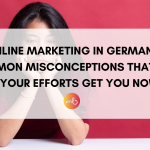 Online marketing in Germany: common misconceptions that can mean your efforts get you nowhere 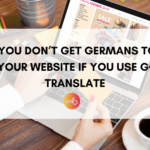